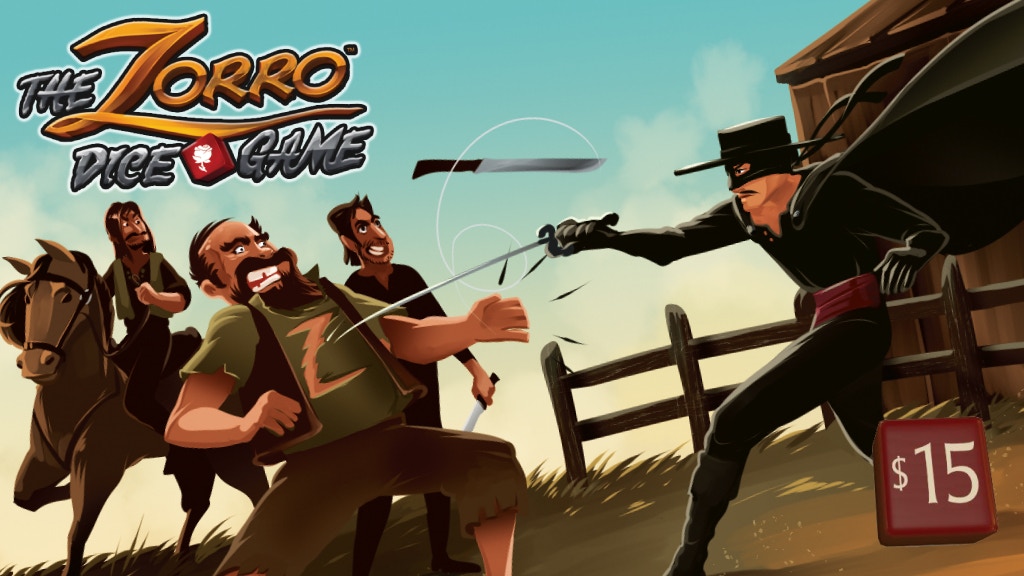 Created by PULL THE PIN GAMES

Gather custom dice and iconic equipment as you thwart scoundrels and duel an epic villain in this quick, light strategy game.

Latest Updates from Our Project:

We have 1 week left of the manufacturing plant being closed for Chinese New Year but I would guess we are right around 50% complete with manufacturing overall. Sadly, the coronavirus is ravaging the part of China where the plant is located, so it is possible it will take longer to get all the workers back safely and it could extend the time it is closed by a bit. So once the plant is up and running again and we get an estimate on when manufacturing will complete, we'll be able to estimate local shipping dates for you, but right now a thumb-in-the-wind estimate is that games will start arriving in late April.

Get your napkins out 'cause it's time to drool. Look at these sleeves!

Below is a close up of the standard version pawns. The deluxe version will have custom meeples but we had to modify the colors of them so we'll show you what they look like when we have final versions.

Awwwwww... don't the sleeved cards look so cozy in the box? We asked for some modifications to this box but this one is close to final.


BGG Most Anticipated Game of 2020

If you're excited about The Zorro Dice Game, you can tell the BGG community by giving it a thumb right here.

Manufacturing custom sleeves, especially of the quality we demand, is very expensive. We’ve included them on quite a few of our campaigns, but we want to know from you how important they are so we know whether to make them part of the deluxe pledge level, include them only as an add on, or maybe we won't include them at all in future campaigns. Can you answer this 1 question survey right here to let us know? Then we’ll share the results in the next update.

Feedback from the Last Poll

We sent a 1-question survey right after the campaign ended to get some feedback about what we could have done better during the campaign. Most respondents didn't have anything to improve and just had positive things to say but the following are the top suggestions for improvements we heard in bold followed by some comments from us about each one, in case you're curious:

We really appreciate all the feedback we received. This is the best way for us to get better. Thank you! If you have more, we'd love to talk more through a Kickstarter message or emailing support@pull-the-pin-games.com.

For those of you who are busy training and completing heroic feats in preparation for the scoundrels and villains that are slithering our way, here is your executive summary so you can skip the rest of the update and get back to it: Things are moving along smoothly and we are still ahead of schedule. Currently delivery estimate: April.

And for the heroes that want more details, keep reading! Since the last update, most of the physical samples were approved and manufacturing on those has begun. We had to make some tweaks to the base game box and meeples and we are still waiting on the sample for the sleeves.

The bad news is that manufacturing almost surely won’t complete before Chinese New Year commences. Our primary manufacturing plant is closed between January 15th and February 10th. Yes, you read that right: it’s closed for 27 days. Sadly, that is just dead time in the schedule and it means there won’t be much to update you on in the next month.

Nevertheless, we’re still on track for an early delivery, shipping in March and in your hands in April. That means we’ll lock down mailing addresses and charge for anything you ordered or added on through BackerKit in late February or early March.

That’s all for now. As always, if you have any questions about your particular situation, you can send us a Kickstarter message or email us at support@pull-the-pin-games.com.

Train hard heroes, the villains are coming. And we’ll be ready.

We have some updates about your BackerKit surveys, so whether or not you completed it, you probably want to at least skim this one. BackerKit surveys are closing on December 14th so this is your last chance to make changes to your pledge and filling out that survey is required to receive your reward.

The deluxe versions of our games have a bunch of Kickstarter exclusive stuff in them, which, if you miss the campaign, can only be acquired by backing a future campaign of ours and hoping we have some left in the pledge manager. So that means you are the only people in the world who have access to the last few deluxe copies of our previous 2 campaigns: New Salem 2nd Edition and Barker's Row.

Here's a review of New Salem 2nd Edition just posted by The Game Boy Geek who gives it his highest honor of a saxophone serenade. Find out why he says, "this is one of the best social deduction games I have in my collection." There are still a few left that you can add to your order in the pledge manager.

For those of you who want to add on a dice cup and/or metal dice, it may be a better deal for you to upgrade your pledge to the All the Things level. We've had some questions about how to do that because it's not very intuitive on the pledge manager. You can do it on the first page when you log-in with your Kickstarter email address or at the top of any of the pages by clicking the link for your pledge.

For those who backed within the first 24 hours, you'll be getting your free dice cup and we finally figured out how to add it into the BackerKit pledge manager. So if you log-in to your survey again, you can make sure it all looks like you expect. If you have any questions, you can email us at support@pull-the-pin-games.com or send us a Kickstarter message.

A quick update on progress: We and the licensor have approved all the print files so we are moving into the physical sampling phase now, which will probably take about a month. We're still ahead of schedule.

Thanks to everyone who reviewed the rules and suggested changes to them in the last update, especially you, @Tim! Today we have some important updates about the BackerKit survey that you are required to complete to get your reward.

BackerKit Surveys have been sent out, which we realize is about the worst time in the world to do this when your inbox is already flooded with Black Friday, Small Business Saturday, and Cyber Monday deals. But we trust you'll fight through it and make your way to the BackerKit email for Zorro.

You have until December 15th to make changes to your order in the surveys, but the good news for your holiday budget is that you will not have to pay for anything you add on until just before we ship in ~February. You'll also be able to change your mailing address up until when we begin shipping. If you can't find the BackerKit email for your survey, you can go straight there using this link and logging in using your Kickstarter email address.

There are a limited quantity of our previous games and accessories in there, so the sooner you fill it out, the better selection you'll have. As we've been doing in recent campaigns, the Deluxe and All the Things items are only available on our Kickstarter campaigns and pledge managers and we are only manufacturing enough to cover what you add on here plus a few extras, just in case.

The one item we'll highlight are the Metal Zorro Dice. You will get these only if you got the All the Things level, but if you backed at another level, you might want to consider adding them on or upgrading your pledge for these reasons:

We've already submitted the print files to the primary manufacturer, which puts us in the proofing phase. In this phase, we need to internally approve the digital proofs and also get approval from the licensor. When we have all approvals, we can begin the process where we get physical samples as a final check. Then once the BackerKit surveys close later this month, we'll send over final order quantities to the manufacturers so they can start mass production. We're ahead of schedule, heroes.

We'll keep you updated with an official update at least once per month and then also with mini updates in the comments of the campaign page. As always, send us questions through Kickstarter messages or by emailing support@pull-the-pin-games.com.

CAMPAIGN COMPLETE AND FULLY STRETCHED! Thank you so much for believing in us, sharing the campaign in your networks, supporting us in the comments, and trusting us to take it the rest of the way. We don't take this trust lightly and if you ever have any questions, concerns, or comments, we would love to hear from you with a Kickstarter message or an email to support@pull-the-pin-games.com.

Now that the funding part of the campaign is over, that means the voting period has ended for the tagline that will go on the front of the base game box. And the winner is........

"The die is mightier than the sword."

Thanks for voting and a big thank you to @Bob for suggesting that one!

To help us improve, we would love to know what you wish we did differently during the live portion of this campaign so we can make our future campaigns better. You can do that by answering this 1 question survey. This survey is NOT REQUIRED to get your reward.

We would like to humbly request your assistance on this heroic feat where we look through the rules and FAQ for the base game and expansion to identify typos or points of confusion. They are all just a single page, front and back, so it won’t take you too long. The FAQ won't make the most sense when you don't have the cards in front of you, but you can still look for typos. If you find any, we’ll tell Zorro of your prowess and it may give you an edge over the other heroes when he chooses his successor. Here they are:

If you have any suggestions for changes to any of these, it’s probably best to just comment on this update to reduce the number of duplicate submissions, but if you’d like to talk something over with us, you can also send us a Kickstarter message or email support@pull-the-pin-games.com.

Right now, we're touching up the print files and preparing the BackerKit survey that we'll send to you around December 1st where you will give us your mailing address and add on additional items. Note that you will not be charged for items added in BackerKit until right before we start shipping next year so it won't affect your holiday funds. We'll be sending full Updates about once per month and then we'll do mini-updates in the main comments of the campaign page.

Thanks again for being with us from the beginning of The Zorro Dice Game,